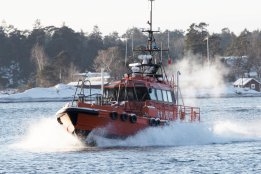 The launch of the converted pilot boat provided a further demonstration of Methanol’s suitability as a marine fuel. Image Credit: FASTWATER

The FASTWATER Consortium and the Swedish Maritime Administration (SMA) say they have successfully demonstrated a pilot boat which has been converted to operate on Methanol fuel.

The demonstration in Stockholm Harbour follows the successful bunkering of the vessel at the SMA pilot station in Oxelösund, Sweden, where the pilot boat will be based.

Methanol is a leading candidate to play a key role in the future marine fuels mix, being backed heavily by the likes of shipping giant Maersk.

While a number of methanol powered vessels are already in operation, FASTWATER says the latest trial shows the fuel is not only suitable for larger vessels.

"The FASTWATER project demonstrates that Methanol is a present and practical choice for application in ports and coastal shipping for all kinds of small craft, where there is an urgent need to reduce pollution,” commented FASTWATER Co-ordinator, Sebastian Verhelst.

Patrik Molander of engine supplier ScandiNAOS added: “This pilot boat is probably one of the cleanest ships on the water, world-wide because it operates on Biomethanol; we have seen huge request for similar engines on the market.”

About 200 ships have received the fuel from Glencore and PetroChina in Singapore.