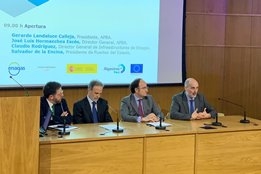 The port of Algeciras says it wants to play a leading role in the emerging market for LNG bunkering.

Speaking at the CORE LNGas hive conference yesterday, Gerardo Landaluce, President of the Port of Algeciras Bay Authority (APBA), said the country already has considerable infrastructure in place to support its goal, including six plants already in operation at its ports that represent 40% of European storage capacity and 5.35% globally.

Algeciras made it first LNG supply of  LNG bunkers in 2012 and currently supplies LNG via tank-trucks, he added.

"The hive project hive will allow Spain to lead, at a European level, the process of energy transition in the maritime sector," said Claudio Rodríguez, General Manager at Enagás.

The CORE LNGas hive project says its aim is to develop a safe and efficient, integrated logistics and supply chain for LNG in the transport industry (small scale and bunkering), particularly for maritime transport of the Iberian Peninsula.

An environmental body labelling VLSFO blends 'Frankenstein fuels' is the latest evidence of fights over marine fuels getting more emotive.

The company's carbon emissions per tonne mile have fallen by 14.2% since 2015.