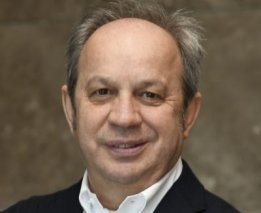 Muhtaroğlu has worked in the bunker industry since 1986 and served on the IBIA board multiple times. Image Credit: IBIA

Energy Petrol CEO and IBIA board member Mustafa Muhtaroğlu has been accused of impersonating a Turkish customs officer in a dispute with the captain of a ship his firm was bunkering.

Turkish maritime news provider Denizcilik Haberleri published on its website this week a recording of a call between Muhtaroğlu and the captain of the bulk carrier M/V Ruby made in the early hours of January 15 while Energy Petrol was preparing to supply the vessel with bunkers near Istanbul.

After a dispute over paperwork, the captain received multiple calls from Muhtaroğlu, according to the report.

In the third call, the recording of which Denizcilik Haberleri published, Muhtaroğlu can be heard introducing himself only as a customs manager, telling the captain not to give instructions to the crew of a Turkish bunker barge.

In the heated exchange that follows, Muhtaroğlu can be heard threatening the captain with imprisonment.

"Release the barge," Muhtaroğlu said on the recording.

Muhtaroğlu told Ship & Bunker on Friday that he had only meant he was the company manager responsible for its customs paperwork, not a customs official of the Turkish government.

The dispute was over the sampling procedure for the bunker operation, Muhtaroğlu said. The two companies had agreed in advance to take a sample for testing from the barge manifold during the bunker operation, and the ship's crew had requested that barge crew sign a pre-prepared label before the operation had started. Energy Petrol's staff refused, saying signing pre-prepared papers would not be legitimate.

The phone calls with Muhtaroğlu followed extensive arguments between the two crews over the issue, Muhtaroğlu said.

The dispute was later resolved and the bunker operation was carried out later that morning, Muhtaroğlu said.

The board of directors of the Turkish Chamber of Shipping has referred the case to its disciplinary board on Friday, according to Denizcilik Haberleri.

Muhtaroğlu is a prominent figure in the bunker industry, working in it since 1986, making regular conference appearances and serving on the IBIA board multiple times.