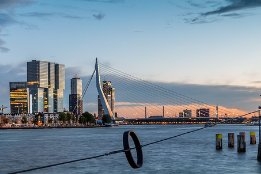 The Port of Rotterdam says it is taking measures to handle the backlog of vessel traffic destined for the port after a six day blockage of the Suez Canal.

"[T]he Port of Rotterdam Authority has initiated proactive consultation with the relevant stakeholders ... to determine how to handle the forecast surge in incoming vessels as smoothly as possible," the port said in a statement posted Thursday.

"While this is undoubtedly a challenging undertaking, we still expect to manage this influx quite effectively – provided we make the right preparations."

Around 60 ships are reported to destined for Rotterdam via the Suez Canal, seven of which are now underway.

At the time of Ever Given's refloating, six of those had decided to detour via the Cape of Good Hope.

To reduce the likelihood of extreme peak loads at the vessels' ports of call, all ships destined for Europe will be passing through the Suez Canal in increasing group sizes at 12-15 hour intervals.

The progress of ships arriving in the port of Rotterdam within the next 48 hours can be monitored via the Shiptracker application.

The 20,000 TEU container ship Ever Given, which ran aground on March 23 blocking the Canal, was freed on Monday.

The company is looking for candidates with at least five years of experience of a bunker trader.

Project will lead to a reduction of emissions in Malta's main port.

From the EU to the U.S., a strong summer demand rebound is highly anticipated.