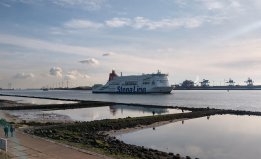 One physical bunker supplier in the Amsterdam-Rotterdam-Antwerp (ARA) area is cited as saying that HSFO demand is down to 100/200 metric tonne clips as ship operators keep fuel tanks topped up before January 1 next year, when the new rule applies.

The changing fundamental in the ARA market is replicated elsewhere with brokers expecting marine fuel buys to be in a two-thirds/one third split between low and high sulfur, according to the report.

Ventifoil unit to be fixed on a Dutch cargo ship.

From a slow start at the beginning of the year.