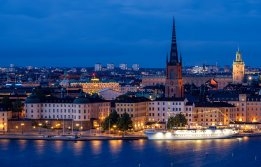 Johan Rådh has joined the company as bunker trader in Stockholm as of this month, according to an update to his LinkedIn profile on Tuesday.

Rådh was previously a bunker trader at Preem, serving in various roles at the company over the past 14 years.

ScanOcean, previously known as Ivar Oil, was formed in 2013 as a purchasing vehicle for Scandinavian shipowners, according to its website. The company carries out physical supply at all Swedish ports via truck and barge, as well as trading bunkers and lubricants worldwide.

The company is seeking to increase its sales to Greek shipping.

Bunker One to Test Biofuels in Brazil Operation Next Month

The firm will try out a 7% biodiesel blend in two of its tugs in Brazil from January.

The company has published a new white paper this week setting out its views on maritime decarbonisation.