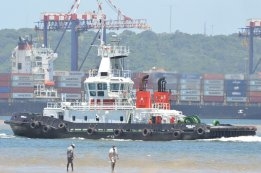 South Africa's maritime and bunkering sector should be ready for IMO2020 although necessary local legislation is lagging, a South Africa-based shipping commentator has said.

Terry Hutson, writing for the South African news provider the Mercury, pointed to a recent shipping getogether on the coming bunker fuel rule change held under the auspices of the SA Maritime Safety Authority.

The two-day Cape Town meeting, which included fuel producers and distributors, bunkering services providers, ship owners and shipping agents, concluded that "the country would be ready in time" but that the "necessary legislation was lagging", Hutson wrote.

And he added that the situation only required the relevant moves by the ministry of transport to put things right.

The South Africa has a number of important bunkering points along its coastline including Durban, Cape Town and Richard's Bay.

In a recent survey the organisation found 60% of respondents saw ammonia and hydrogen as the most attractive fuel options for the long term.

"That LNG is the most appealing solution for today is not at odds with investing in developing longer-term solutions for the industry."