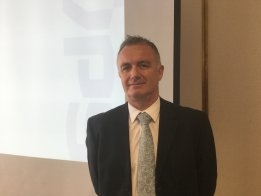 Off-spec fuel incidents usually increase in the months before and after a regulatory change.

That being so, it's a safe bet to say that the market can expect something similar as it moves towards the start of IMO2020, according to Veritas Petroleum Services (VPS) commercial director Steve Bee.

Bee told a seminar in London Wednesday that the new sulfur cap on bunker fuel will cause a 3 million barrels a day shift of bunker demand from heavy fuel oil to distillates. With such a shift, a certain unevenness as the market adjusts is to be expected.

"I would expect that number to rise."

To date bunker alerts have been running at the rate seen in the last few year but that may change in last quarter of the year, he added.

From the start of 2020, all ships must use IMO2020 grade fuel or have the necessary equipment to allow the continued use of high sulfur fuel oil.

The IMO2020 seminar was organised by VPS and held in London.

The system takes bio-LNG fuel, extracts carbon from it to leave a hydrogen-rich gas, and then powers the ship's engine by running this gas through a fuel cell.