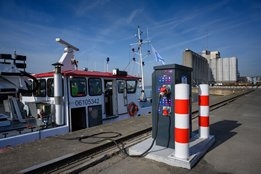 Said to be a first for inland waterway vessels, the units have been installed at the Sifferdok's inlet dock and were officially commissioned on Friday March 1, 2019.

The port says the shore-side power available in Ghent and Terneuzen is 100% renewable.

By plugging into shore power, vessels are able to switch off their engines and reduce at-berth emissions.

Focused once again on ship-to-ship operations in Western Japan.