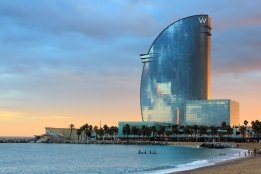 The northern Spanish port city of Barcelona is considering restricting the number of cruise ship calls.

Part of the reason is that the move would reduce air pollution in the city where air quality regularly exceeds World Health Organization limits for nitrogen oxide and PM10 particulates, according to UK news provider the Guardian.

In addition, Barcelona's city authorities have called for emisions control area (ECA) to be set up across the Mediterranean region.

The rebates will be applicable for journeys starting from May 1 to June 30.

Armed Men Board Ship in Strait of Hormuz

The ship was boarded at 1:28 PM London time while at anchor close to Ras al Kuh in the south-east of Iran.

The event, being held online at 10 AM London time on May 13, will be titled 'The tanker market: 2020 not what you expected, what's next?"