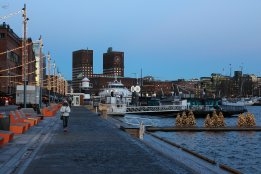 An action plan agreed earlier this year to reduce ship emissions in the port of Oslo provides context in the development of green ship technology.

Under a city-wide mandate to cut overall emissions by 95% by 2030, the port wants to reduce emissions by 85% and put it firnly on the road to becoming the world's first zero-emissions port. Current annual greenhouse gas emissions are around 55,000 metric tonnes.

"It's very ambitious, but what is necessary if we are going to reach the Paris Agreement," Heidi Neilson, the port's head of environment, was quoted as saying by urban news provider Citylab.

With ferry routes connecting Olso to Germany and Denmark, the ferry sector is responsible for nearly 40% of the port's emissions while local ferries account for 12%.

Marine tech firm Norled has a contract with the port to switch three ferries over to electric power. The first retrofitted ferry was delivered in September, the report said.

The company is also involved in developing hydrogen as marine fuel.