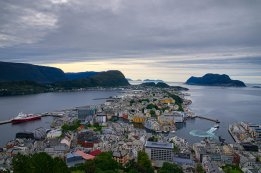 The ship's power comes from five-megawatt hour batteries which can be charged in an hour by cold-ironing at the southern Norwegian port of Sandefjord.

Other features include using waste heat from engine cooling and exhaust gases for onboard heating and an energy-saving hull design, the company said.

Much of the machinery and equipment for the ship has come from local, maritime firms. The ship, called M/S Colour Hybrid, can carry 2,000 passengers and 500 cars.

Its maiden voyage will be from Sandefjord to Stromstad in western Sweden on August 9. The new service will increase ferry capacity between the two Scandinavian countries.

Color Line is a major Scandinavian ferry operator with an annual turnover of NOK 5 billion ($560m).

Goldenbeck is now listed as Dan-Bunkering's sales manager in Middelfart.

China is set to apply a value added tax rebate on fuel oil from 1 February.