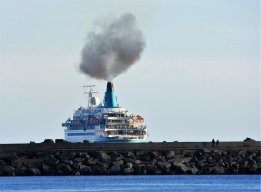 LNG leads the field as a viable substitute for oil-derived bunker fuel given the alternative fuels available in the run up to 2030, an academic has said

Speaking at the ABS Pathways to low carbon shipping webinar, Dr Lambros Kailtsis said that the role of alternative marine fuels will be "crucial" for shipping to meet its greenhouse gas (GHG) targets in 2030.

Kailtsis, who is vice dean at the school of naval architecture & marine engineering of the National Technical, University of Athens, outlined three, main, alternative shipping fuels which all carried disadvantages.

The question of liquifed natural gas's methane slip remained a grey area.  Storage tanks for the fuel was another area of concern.

"The initial investment cost to get things moving including for retrofits will be high," Kailtsis said.

Methane and liquified petroleum gas are viable contenders but both fuel forms require NOX reduction systems. Methane has issues with corrosion while storing LPG is not straightforward.

But using oil-derived fuel oil as a reference and when measured against shipping's 2030 goal to reduce its contribution to GHG, LNG stood out as the clear winner.

In his introduction to the topic, Kailtsis said that the various ways limit GHG emitted by the world's fleet remained largely at the developmental stage.  But of the three areas -- alternative fuels, all-electric power and more efficient ships -- alternative fuels had a crucial role to play in controlling shipping's carbon footprint.

Looking ahead, Kailtsis said that a probable CO2 tax on shipping would ultimately determine "how well these new fuels develop technologically and economically".

Stunning U.S. Job Figures Cause Big Gains For Crude as Trump Calls For All Lockdowns To End

Meanwhile, the long-awaited OPEC meeting is set for Saturday.