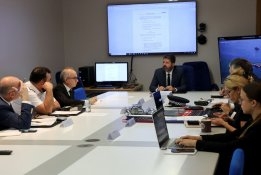 Gibraltar's OS 35 Recovery Coordination Group has been monitoring the situation for the past two weeks. Image Credit: Gibraltar Port Authority

Bunkering has resumed in Gibraltar's waters following an oil spill from the stricken bulk carrier OS 35 two weeks ago.

The port authority allowed bunker operations to resume from 6pm on Friday, the port said in a statement on its website.

The hull of the Tuvalu-flagged bulker OS 35 broke on August 31 after it collided with the ADAM LNG in Gibraltar the previous day, the territory's government said last week. The government subsequently declared the collision and its consequences a major incident under the provision of the Civil Contingencies Act.

All port operations were halted from August 31. Most operations apart from bunkering were allowed to resume on Wednesday.

Gibraltar's government has postponed the Gibraltar Maritime Day industry event due to be held in London on September 20.