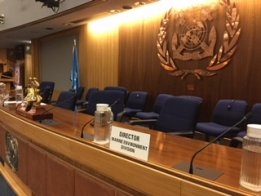 Mariitime NGOs in favour of a emission control area in the Mediterranean are urging the International Maritime Organisation to make the plan a reality.

The proposal to set up a Med ECA where bunker fuel is capped at 0.1% sulfur is to be heard at the IMO's next Marine Environment Protection Committee (MEPC) meeting in June. The global sulfur cap on bunker fuel is 0.50%.

If passed, it would then go forward to the next meeting (MEPC 79) in December for approval to come into force in 2025.

Citing the environmentally beneficial experience of ECAs in other parts of the world, Diesener said that this comprehensive proposal confirms the many evidence-based arguments for implementing the MedECA proposal.

Studies have shown that the counter arguments against such a move (economic disturbances, modal shift and issues with the supply of compliant fuel) have not materialised, she added.

The ngos have lobbied hard to the anti-air pollution measure to come into force.  France and Spain were earlier adopters although in December signatories to the Barcelona Convention turned the tide in favour of a MedECA.

Crossing the $1,200 pmt threshold would be felt right across the shipping industry, a Posidonia event hears.