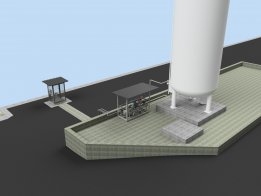 Technology company Cryostar and KC LNG, the LNG division of Denmark's Makeen Energy, have won a contract to build an LNG bunkering facility at Antwerp.

The new facility is set to be commissioned in the first quarter of this year, and will increase the LNG delivery options at the port, Makeen said Friday.

"LNG-powered inland waterway ships will be able to dock at quay 526/528 for bunkering from a fixed storage unit while LNG powered trucks will be able to refuel at the facility as well," the company said.

From the middle of 2020, Fluxys and Titan LNG's FlexFueler002 LNG bunker barge will also become operational at the port, Makeen said.

LNG will not be able to meet the IMO's 2050 target, according to Gaslog Chairman Peter Livanos.