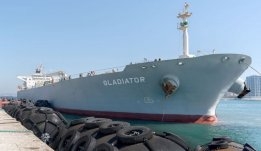 The ship has been moved from the Middle East to GIbraltar over the summer. Image Credit: Peninsula Petroleum

Bunker supplier Peninsula Petroleum has added an LR1 tanker to its fleet, the company said Wednesday.

The Gibraltar-based firm has added the tanker Gladiator to support its operations in the Mediterranean, it said in a LinkedIn post.

The ship has been moved from the Middle East to Gibraltar over the summer, according to shipping intelligence service VesselsValue.

Peninsula supplied a total of 14 million mt of bunker fuel worldwide last year, according to its website.

Vale and Rio Tinto have both expanded their operations in the area this week.

Some previously arranged stems are still being carried out, but the company has been advised against taking on new business for now.

Samsung Heavy Industries will now attempt to commercialise the ship design by 2024.