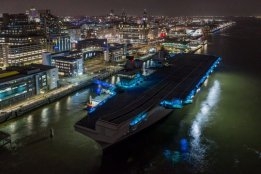 WFS supplied the HMS Prince of Wales with 1,080 mt of marine gasoil at the Liverpool Cruise Liner Terminal during the aircraft carrier's inaugural visit to Liverpool earlier in March, Stonewin said.

The operation was carried out by truck.

Stonewin has a contract with NATO to supply bunkers to military vessels in the UK and other regions, the company said.

Scorpio Tankers Warns Scrubber Benefits May Not Be Fully Realised

Scorpio has paid about $2.5 million per vessel for its scrubbers.

Relief for Crude Prices On Monday, But Experts Dismiss It As Temporary

The company expects to sign its first purchase agreements with shipping companies for synthetic methanol later this year.