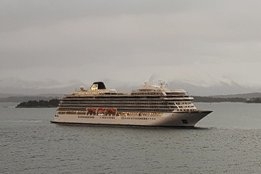 An investigation into the recent loss of power (LOP) incident of cruise ship Viking Sky has determined it was caused by low lube oil pressure, Norwegian authorities have said.

With memories of last year’s spate of “bad bunker” incidents still fresh in the minds of many, outside of the mainstream media coverage this week there has been much speculation that last Saturday’s LOP had been caused by faulty fuel.

“For the present, our conclusion is that the engine failure was directly caused by low oil pressure. The level of lubricating oil in the tanks was within set limits, however relatively low, when the vessel started to cross Hustadvika,” Norwegian Maritime Authority said in a statement.

“The heavy seas in Hustadvika probably caused movements in the tanks so large that the supply to the lubricating oil pumps stopped. This triggered an alarm indicating a low level of lubrication oil, which in turn shortly thereafter caused an automatic shutdown of the engines.”

Viking Ocean Cruises says it has inspected lube levels on the sister ships and revising its procedures to prevent a repeat of the issue.

Bunker Prices: Don't be Fooled by What you See at the Moment

The picture is being heavily influenced by panic and short term transitional logistical issues. The future is going to be very different.