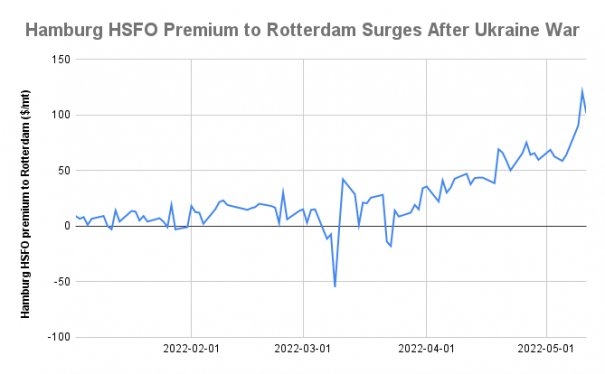 Replacing Russian HSFO while remaining competitive is proving to be a challenge for the Hamburg market. Image Credit: Ship & Bunker

Hamburg's HSFO premium to Rotterdam's price levels has widened significantly since the outbreak of war in Ukraine.

The premium for HSFO at Hamburg over Rotterdam widened to $120.50/mt on Tuesday, according to Ship & Bunker prices, up from $47/mt a month earlier and $19/mt three months earlier, before the start of the war. The premium was the most in at least three years, and compares with an average premium of $11/mt in 2021.

The German bunker market is more reliant than the ARA hub on Russian exports for its HSFO. With several top bunker companies and buyers refusing to deal in Russian oil since the invasion of Ukraine, suppliers in Hamburg are having to turn elsewhere to find HSFO.

The global HSFO market has also tightened somewhat since the contamination problems reported in Singapore in February and March.

CPC Corporation's barge the Chung Yu No 1 will cease operations for maintenance until the end of July after a collision.