Container Ship Ever Given Remains Stuck in Suez Canal 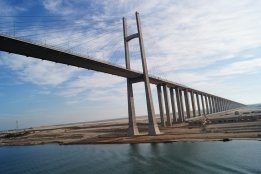 Traffic remains halted in both directions on the Suez Canal. File Image / Pixabay

Evergreen Marine's 20,000 TEU container ship the Ever Given remains stuck blocking traffic in the Suez Canal, according to media reports, countering earlier reports that the ship had been refloated.

News agency Reuters cited an assistant manager at shipping service company GAC's Egypt office as saying earlier reports of the ship having been partially refloated and of traffic resuming soon were incorrect.

The Ever Given ran aground on Tuesday morning, causing traffic on the canal to halt in both directions.

Price reporting agency S&P Global Platts reported almost 50 ships across tankers, bulkers and container ships were waiting to enter the canal on the south side on Wednesday morning,

COO Svend Mølholt expects a further boost to its volumes 2021, but warns of sliding profits as margins come under pressure.

The company delivered about 8,000 mt of VLSFO to the facility on board its chartered tanker the Maersk Tampa.