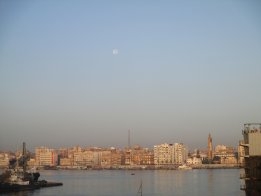 The Suez Canal is one of the most important chokepoints for global shipping. File Image / Pixabay

The container ship blocking the Suez Canal after running aground on Tuesday has been 'partially refloated', according to shipping services company GAC.

Evergreen Marine's 20,000 TEU ship the Ever Given ran aground on Tuesday morning, causing traffic on the canal to halt in both directions.

But the situation may be resolved soon, GAC reported on Wednesday, allaying fears of serious disruption to the global shipping industry lasting for several days.

"According to information from the Suez Canal Authority, the grounded vessel has been partially refloated and is now alongside the Canal bank," GAC said in a note on its website.

"Convoys and traffic are expected to resume as soon as vessel is towed to another position."

A selection of industry leaders on the 'Coping with COVID-19' panel at the IBIA event on Monday painted a picture of an industry that has come out of last year's crisis with surprisingly little damage.