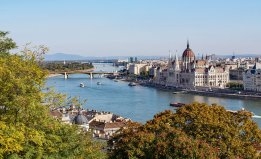 The ships with the fuel cells will transport green hydrogen along the Danube from Romania to industrial buyers in Austria and Germany. File Image / Pixabay

The firm has signed a supply frame agreement setting out plans to install fuel cell modules with a combined capacity of up to 200 MW on board Chemgas tugboats and barges operating on the Danube, the company said in a statement on its website on Thursday.

"Chemgas Shipping plans to install fuel cell modules from TECO 2030 on up to 120 transport barges and between 40-60 tugboats," the company said in the statement.

"The exact number remains to be decided, and purchase orders outlining the price and delivery time for the fuel cells will be signed for each individual ship over the next few years."

The deal may result in revenue of up to 150 million euros for TECO 2030 over the next three to eight years.

The ships intended to be fitted with the fuel cells will transport green hydrogen produced from solar and wind farms in Romania to industrial buyers in Austria and Germany.

The companies are aiming for a delivery date in early 2023 for the first fuel cell, with most of the rest set to be delivered after 2025.

The company's first barge is due for delivery later this month.