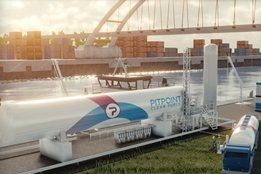 What is being billed as Europe’s first permanent bunker station for liquefied natural gas (LNG) bunkers will open in June, says PitPoint.LNG.

Located on the Rhine in the port of Cologne, the facility will service the inland shipping market.

“With the construction of this bunker station, we are taking a major step towards realising our goal of facilitating cleaner transport over both roads and waterways,” says Jan Willem Drijver, Managing Director of PitPoint.LNG.

“This bunker station on the busiest waterway in Europe is an important milestone in the further expansion of the international LNG fuel-station infrastructure.”

Interest in LNG bunkers has been growing steadily in recent years thanks to tightening emissions regulations on marine fuel.

Meanwhile, experts forecast that demand next year will only be at 2017 levels.