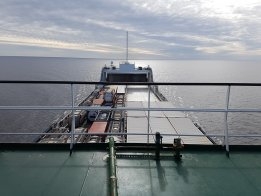 French box ship operator CMA CGM and oil major Shell are to work together on expanding the former's use of biofuels for its fleet.

CMA CGM has already trialled biofuel on two of its ships.

Under the agreement with Shell, the use of biofuel as bunker fuel will be accelerated, according to maritime news provider ShipInsight.

The fuel comprises 80% of low sulphur fuel oil and 20% of a biofuel made of used cooking oil.

The move is one of a range of environmental initiatives taken up by the French shipping group.