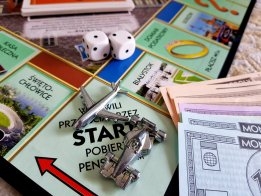 Will new fuels be able to break though existing monopolies? File Image / Pixabay.

Vested interests in traditional energy sources could hinder the progress of alternative fuels such as hydrogen, an industry expert has said.

Knut Linnerud's views (he heads up the H2 Cluster), can be heard at an event on prospects for the alternative marine fuel held as part of the Nor-Shipping Hydrogen Blue Talks series.

A handful of Norwegian maritime players with their own interest in pursuing the hydrogen solution will also be on hand to discuss the prospects for the alt marine fuel.

Participant Hege Økland, who is head of NCE Maritime Cleantech, said that one advantage of the fuel is that it "can be produced from renewable energy, with tried and tested production technology".

"Liquid hydrogen can be a cost-competitive green fuel, when produced at volume, and offered through an efficient logistics chain with safe, robust bunkering operations."

But bringing the infrastructure into being will require large sums which means it will need government support.

There is an iron grip on energy that, somehow, needs to be broken

"Governments have to work, both nationally and internationally, to come up with a concrete plan for an adequate infrastructure to serve the maritime industry," said Bjørn Saltermark, general manager for the Maritime Forum South.

Stein Kvalsund, the chief executive of the Hub for Ocean/Ocean Hyway Cluster, agreed: "Government hydrogen strategies will soon lead to an explosion in investment that will result in rapid improvements in hydrogen technology."

In Norway, the government has "strong ambitions to phase in low- and zero-emission technology in the transport sector in general, and in public maritime transport, in particular," according to general secretary of the Norwegian Hydrogen Forum, Ingebjørg Wilhelmsen.

But while developing the fuel is seen as urgent, the participants acknowledged that there are constraints to be overcome, not least from vested interests in the energy sector.

"There is an iron grip on energy that, somehow, needs to be broken," Linnerud said while, according to Okland, "the [energy] transition is moving too slowly to reach the ambitious goals set for shipping".

There has been a sharp reduction in terrestrial positions tracking AIS signals in China this month.

ICS to Work With IRENA on Shipping Decarbonisation

The firms will cooperate over the next two years on decarbonisation projects.