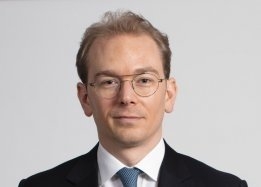 Mikkel Jacobsen, who stepped down as TFG Marine's co-head of bunkering earlier this year, has taken up a new marine fuels role with commodity traders Montfort.

Jacobsen has joined Montfort as head of bunkering in Dubai as of this month. It was announced in January that he would be leaving TFG Marine, before details of his new role emerged.

Montfort is a new commodity trading firm with a particular focus on gasoline, distillates, and crude, according to a company profile document seen by Ship & Bunker. The firm has offices in Geneva, Dubai, Fujairah and Singapore.

"We trade liquid and dry bulk commodities, and we invest in selective assets and infrastructure that optimize our trade flows and create long-term value," the company said in the presentation.

The company is not yet ready to reveal its plans for the bunker market, Jacobsen told Ship & Bunker by email.

Jacobsen was made co-head of bunkering at TFG Marine when it was founded by Trafigura, Frontline and Golden Ocean in 2019. Before that he worked under the same title for Trafigura.

Ulvan Rederi's ship the Oddrun With is under construction in Turkey and will have a 350 m3 LNG tank as a well as a battery propulsion system.