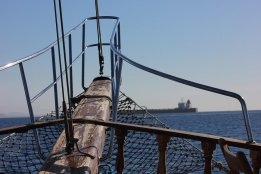 A fuel leak from a ro/ro ship in the Red Sea has caused pollution along parts of the Aqaba coast.

The incident is thought to have taken place a week ago with oil from the leak washing up on Egyptian beaches, according to maritime news provider Tradewinds.

The authorities have been working to deal with the pollution from the Aqaba container terminal and other parts of the 26 kilometre coastline, it added citing local media reports.

The size of the spill is unknown. While oils spills at sea still occur, they tend to be smaller than in the past. Following the Exxon Valdez spill in 1989, regulation on oil transportation tightened while tankers adopted the double-hull design.

California May Consider Tighter Rules for at Berth Emissions

But practical proposals at early stage.

Impact on market dynamics remains to be seen.

To become mandatory for all ships from January 1.