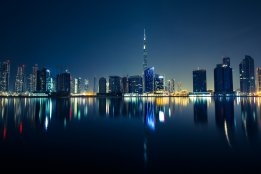 Van Elderen has relocated to Dubai for his new job. File Image / Pixabay

Van Elderen announced his departure from Trefoil -- where he had served as managing director for just five months -- in August, but had not said where his next role would be. He had previously been the commercial head in Europe for Cockett Marine Oil from 2016 to 2021, and had earlier been the longstanding bunkering manager at Argos Bunkering.

Van Elderen has relocated from Rotterdam to Dubai for his new role with Sing Fuels, he said on Wednesday.

"I am very much looking forward to work closely together with the leadership team and all Sing Fuels colleagues to further accelerate our international growth and exposure," he said.

Sing Fuels saw its revenues climb by 45% and its marine fuel sales volumes jump by 20% in the 12 months to September 30 from the same period a year earlier, according to an S&P Global Platts interview earlier this month with Sonnich Thomsen, the firm's managing director for bunkers.

The firm is considering an expansion in Europe and the hiring of more staff in the Americas, Thomsen was cited as saying.

Hyundai Samho has received an order from a European firm for six container ships.