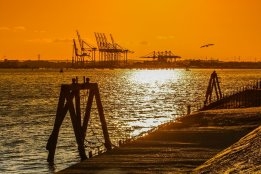 The circumstances surrounding a crude oil tanker anchored off the southern coast of the UK remain unclear.

The ship, Nave Andromeda, is currently anchored off Sandown on the Isle of Wight, Reuters reports.

Reports that stowaways were onboard and that there had been a possible hijacking attempt of the vessel were being widely circulated in the UK media on Sunday.

But the BBC quoted lawyers acting for the vessel's owners as saying that the incident was "a hundred per cent not a hijacking".

The ship had been expected to dock in Southampton on Sunday morning but was reported to have adopted an erratic, zig-zag course through the Channel, according to the Guardian newspaper.

Abuthathir Abdul Gafoor and Yessica Budiman of AAC Corporate Advisory have been appointed as provisional liquidators of the company.

The ship is the fifth of eight ordered from Samsung in 2018, and the sixth is due to be delivered in December.

But Kemp says Covid is still a major concern for the commodity.