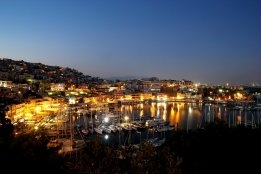 The Union of Greek Shipowners (UGS) opposes the European Union's aim of including shipping within its emissions trading scheme, and hopes progress at the International Maritime Organization (IMO) will see it off, according to its president.

In a speech in Piraeus last week, UGS President Theodore Veniamis called the European plan "inadequate" and "aimed solely at political ends," and said it would undermine the IMO's role in regulating shipping.

The European Commission plans to extend the emissions trading scheme to shipping in its European Climate Law, expected to be introduced in March.

The move would put a cap on total greenhouse gas emissions from European shipping, set emissions allowances for companies and allow them to trade them with each other.

"We hope that at the forthcoming IMO Marine Environment Protection Committee meeting in March 2020, we will have positive developments that will hinder any European pursuits," Veniamis said.

The UGS backs mandatory slow steaming for shipping instead as a short-term measure to bring down the industry's emissions, Veniamis said.

Crude Down on Weak China Data, Optimism For Healthy 2020 Replaced by Doubt

CMC Markets believes crude's upside will be limited this year.