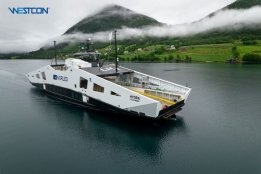 The ship has joined its sister vessel NESVIK on the Hjemeland-Skiapavik-Nesvik route in Norway. Image Credit: Westcon Group

The double-ended ferry HYDRA, designed by engineering firm LMG Marin, has now been delivered and is ready to enter service, LMG Marin said in a LinkedIn post on Thursday.

The ship has joined its sister vessel NESVIK on the Hjemeland-Skiapavik-Nesvik route in Norway.

"She is ready to sail on liquid hydrogen; this will only happen when supply is available, hopefully in a few months," LMG Marin said.

The company did not specify whether the hydrogen the vessel will run on will be green hydrogen produced using renewable power.

The availability of green hydrogen at a large scale will be a significant hurdle for the shipping industry as it seeks to decarbonise over the coming decades. It is likely to be in demand as a fuel, for use in fuel cells and to produce green ammonia and methanol, as well as for many other industries worldwide.

The firm has taken a minority stake in a portfolio consisting of five refined product and methanol tankers designed to run on methanol and four ice-class LR1 product tankers.