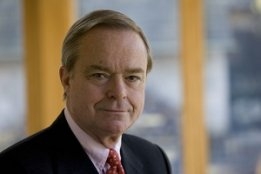 There is little doubt now about the enthusiasm for Exhaust Gas Cleaning Systems (EGCS). There is every evidence that EGCS are viable on most larger vessels which in turn consume 80% of global bunkers. Some 40% of tankers currently on order will have EGCS before the end of 2020 and no doubt this percentage will increase for most types of larger vessels. The general wisdom has been that it is not viable to retrofit EGCS on older vessels where as in fact this may be the only way these vessels can continue trading after 2020 when higher bunker prices will further deteriorate their competitiveness against newer, eco friendly vessels. An older vessel with EGCS will have 25% lower bunker costs than a newer, comparable vessel consuming 0.50% bunkers.

The viability of EGCS principally depends on the future price differential between HSFO and 0.50% bunkers. The consensus has been that this differential could be well over $300/ton in 2020 but once through the initial chaos the differentials will be rationalised by increased use of EGCS, growing inland demand and refiners continuing to respond to the price differential. Longer term the MGO – HSFO price differential could be expected to settle at around or probably slightly higher than today's level of $210/ton to $260/ton. The MGO – 0.50% differential could be as low as $50/ton with unsophisticated blending of HSFO and MGO but it is expected to be around $100/ton certainly until a game changing new world scale desulphurisation technique emerges. Post 2025 a differential between 0.50% bunkers and HSFO is expected to be around $140/ton. It costs about $30/ton to operate an open loop EGCS leaving a cost saving of $110/ton. A VLCC consuming 17,000 ton pa would have cost savings of the region of $1.8 million pa. Assuming a retrofit for a VLCC costs $4.3 million the owner would be breakeven in under 30 months. The economics of installing an EGCS on a new build is even more attractive as the capital costs are lower which suggests the take up of EGCS will continue well into the late 2020's if not beyond.

Marine and Energy Consulting Limited's (MECL) latest estimates of bunker demand sees residual bunker consumption of 90 million tons (1.6 million bpd) in 2020 assuming an average of 1,500 EGCS in operation during the year and compliance levels of around 70%. As compliance improves and the use of EGCS increases residual bunker demand could return to 2018 levels by 2033. 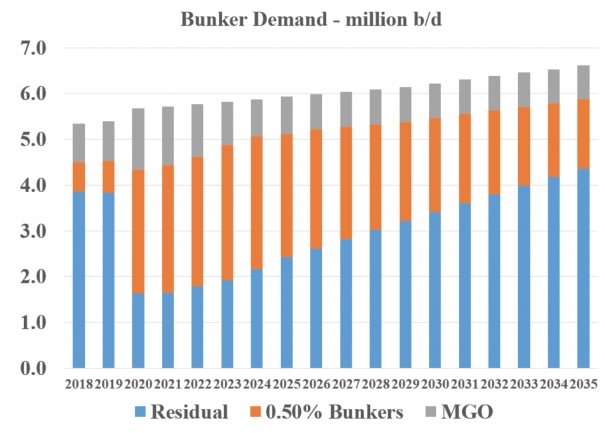 This presents refiners with a real dilemma if residual demand is to recover. Added to this is the uncertainty of how aggressively LNG and other alternative fuels will bite into the conventional bunker market as well as the impact of the commitment to reduce marine greenhouse gas emissions.

However, globally refiners have not been seen to respond to the shift in bunker demand patterns because of the introduction of the 0.50% global cap in 2020 as rapidly as some observers had expected. There may well still be a short fall of compliant, usable bunkers in the early 2020's but there is every evidence to suggest that not making further significant investment in residue destruction as a result of changing bunker demand patterns may well be right in the longer term.

These observations very much relate to the take up of EGCS which is only encouraged by the acceptance of the short and long-term economics for new and older vessels and the likelihood of the capital costs of EGCS coming down after the current initial leap in demand. The EGCS manufacturers are scaling up with one company expecting to deliver one EGCS per day next year. The increase in EGCS use is further encouraged by the growing availability of funding for EGCS with leasing being an attractive approach starting to be offered by more financiers including banks and funds as well the large suppliers of residual fuels with HSFO offtake contracts.  Total investment in retrofitting EGCS over the next five years is expected to be of the order of $18 billion. A market many in the marine financial world cannot ignore.

For some owners the principal obstacle in deciding their EGCS strategies is a lack of knowledge and experience. MECL can advise owners through what is seen as a five-step process. The first is identifying which vessels are likely to be viable using MECL's capital and operating costs models. This is followed by assisting the owner in selecting and contracting with an engineering designer, then the selection of the EGCS manufacture and then the yard. The parallel process is assisting the owner in identifying sources of funds. In many cases an owner will have their preferences and existing relationships but in the near term environment where there is a rapidly increasing number of participants at each step of the way offering owners their products and services owners may well benefit from access to independent advise. At the same time, MECL can also suggest other ways to mitigate risk, including hedging the sulphur premium.

Robin Meech is the Managing Director of Marine and Energy Consulting Limited, based in the UK. The company provides independent advice to a wide range of clients. Robin Meech has been involved with EGCS for some 10 years and has advised numerous clients on the viability and risks of investing in EGCS. Contact: rmeech@robinmeech.com