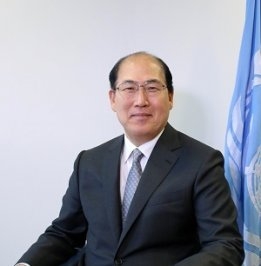 The UN body's chief will be the opening speaker at the IBIA Annual Convention 2020 in November.

The global convention, being held online this year for the first time, will cover three days from November 3. It will include a virtual exhibition hall, access to extensive in-depth on-demand content, and a series of both regional and globally-focused live-streamed panel discussions with audience participation.

"From the new sulfur limit on marine fuels this year to the strategy to decarbonise shipping over the coming decades, the IMO is at the heart of the biggest challenges facing the bunker industry," Sofia Konstantopoulou, global head of marketing and events at IBIA, told Ship & Bunker Monday.

"IBIA is delighted to host Mr Lim as he sets out his views on the evolving marine fuels landscape."

Bunkers Moving Up the IMO Agenda

Historically the regulatory framework for bunkering was a somewhat lower priority among all the other areas the IMO covers, but it has steadily been moving up the agenda over the past decade with the various changes to Marpol Annex VI.

The bunker industry's biggest area of uncertainty over the activities of the IMO is its strategy on the reduction of GHG emissions from shipping.

The IMO's initial strategy envisages a cut of at least 40% from 2008's levels to carbon emissions per transport work by 2030, and a cut of at least 50% to the shipping industry's total greenhouse gas emissions by 2050. As yet there has been no clear guidance from the IMO about how individual shipping companies will be made accountable for this target.

At the start of August the IMO released its Fourth GHG study, showing that the shipping industry's total GHG emissions had dropped after 2008 but have risen slightly since 2012.

Container ships, reefers and cruise ships are already required to use shore power, and the new regulation adds car carriers and tankers to the list.