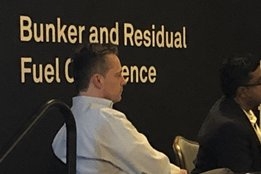 Michael Winstone, Vice President, Freepoint Commodities, has told Shipowners not to worry about the cost of IMO2020 grade fuels and has encouraged them to pool their buying power.

"I think there's a feeling from some of the refiners that they've kind of got the shipping industry by hostage and that's only because the supply chain allows them to feel that way," he told delegates at the recent 16th Annual Bunker and Residual Fuel Conference in Houston.

"There's a handful of refiners and yet there are hundreds of different shipowners, but they don't have a combined purchasing power as such."

Winstone said shipowners should look to changes in how the airline industry buys its fuel as to what might be possible for Marine.

He also noted moves by Maersk, boosting it's own supply business, and volumes of IMO2020 grade fuel being bought up by Euronav, as evidence that shipowners are already making bold moves to address the challenges of IMO2020.

"I would encourage you to combine your power. Don't cow to people who just want to try and dictate price to you. There are economics, there is flexibility in the market. If you're not getting pricing don't worry about it," he said.

"The molecules are there, they're not going away just because some of these independent bunker suppliers might not have actual access to physical molecules and pricing. The molecules are going to be there, don't be worried about the supply side of it."

Overall, Winstone says the industry is a lot better prepared than most people realize and there is plenty of oil ready for the inventory switchover to lower sulfur fuels.

"The market  has made a lot more preparation than I think many people genuinely believe," he concluded.

One of the trial's purposes will be to determine the potential application of the system for Maerk's new methanol-fuelled ships.