INSIGHT: Is Maersk Oil Trading Emerging as One of the World's Biggest Physical Bunker Suppliers? 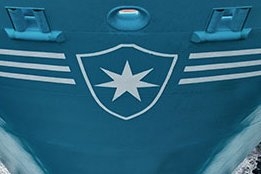 IMO2020 is bringing a big shake up to the bunker industry, and in the newly emerging world order Maersk Oil Trading (MOT) is looking set to be one of the world's largest physical suppliers. Or at least that's what all the signs suggest.

Earlier this month MOT announced it has installed the world's largest bunkering mass flow meter (MFM) on one of its chartered barges in Singapore.

Capable of delivery rates up to 1,000 mt per hour, effectively double the flow capacity of other heavy fuel oil (HFO) mass flow meters in use, MOT said it already has plans to fit a second barge with one of the mega-meters.

Some readers may naturally be wondering why MOT have made such a significant commitment to HFO-focused tech so close to the transitional period for IMO 2020, particularly as Maersk has taken such a strong position on using compliant fuel rather than scrubbers and HSFO.

To that end, in a written response to add clarity to its move, MOT told Ship & Bunker:

"Heavy Fuel Oil (HFO) has a range of physical properties and varying sulphur content. We still need to deliver several million tons of HFO in Singapore in 2019, which is enough to warrant the shift to this high capacity mass flowmeter. Further, it is not limited for use with only HSFO but can be used equally well for other fuel types, including 0.5% compliant fuels. We expect that our own fleet and those of our other customers will appreciate the benefits that this equipment brings."

Coming soon after news last year that MOT has secured significant new storage for its 0.50% sulfur products in both Rotterdam and Singapore, what the announcement also hints at is that MOT is gearing up to play a much bigger physical supply role in the post-2020 market.

The press release opens by telling us that MOT is "the leading operator in the bunker fuel and lubrication market", "the world's largest commercial buyer of marine fuel", and reminds us it "supplies fuel for Maersk's global vessel fleet and 3rd party customers."

Comments by MOT Singapore's Head of Trading, Peter Beekhuis, were also indicative of a higher ambition.

"Our customers need large quantities of highly viscous fuel oil, however, as terminals become more efficient port stays are becoming shorter. The installation of the Promass X will give us the delivery rates we require to keep pace with our customers' demands while maintaining full transparency over the quantity delivered," he said.

Another new factor in play are the concerns raised over compatibility issues between the different IMO 2020 blends coming into the market. This is both between products from different suppliers, and the potential for composition variations between stems from the same supplier.

So, MOT are telling us not only are they the only ones with the beefed-up MFM tech needed to service these increasingly tight box ship turnaround times, but they'll be selling fuel that comes with the unrivalled assurance it's the same stuff being trusted for Maersk's own global vessel fleet - a supply proposition likely attractive for Maersk Line's peers at the very least.

But perhaps the biggest clue of its new ambition came last week when the Maritime and Port Authority of Singapore (MPA) released its 2018 rankings of the biggest suppliers. Having obtained its Singapore bunker supplier license in July 2016, MOT ranked as the 27th largest supplier in 2017. For 2018 MOT was the port's biggest positive mover, jumping 18 places to be the 9th largest supplier in the world's biggest bunkering port. Local market sources have indicated to Ship & Bunker that this growth is primarily built on attracting third party business.

Alongside this, MOT have also made a number of notable global hires. Savvas Manousos, an industry veteran of some 29 years, more than 21 of which were spent at BP, at the end of 2016 was brought in as MOT's Head of Global Trading.

"It was not always the case that Maersk Oil Trading was happy to be called a physical supplier, so if nothing else there is a clear change in message now," 20|20 Marine Energy's Adrian Tolson told Ship & Bunker.

"When you consider Maersk buy around 12 million mt/pa, and MSC and CMA each buy between 7 to 9 million mt/pa, you can see MOT have the potential be one of, if not the, world's largest physical bunker supplier. Factoring in that this is happening alongside moves to beef-up their third-party sales, all the signs suggest we can expect to be see lot more of MOT as part of the emerging IMO2020 bunker supply picture.

"I also believe a shipowner who is a physical supplier is only positive for the bunker industry as a whole."

Preliminary findings of the report presented at COP 26 this week show the shipping industry has underestimated the effect.

The average global spread between VLSFO and HSFO stood at $136/mt on Monday.