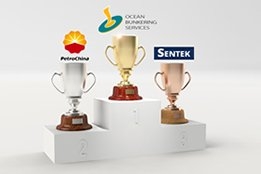 Ocean Bunkering Services (PTE) Ltd, the bunkering arm of the Hin Leong Group, has taken the title of Singapore's biggest bunker supplier by volume for 2018, according to the latest data released today by Maritime and Port Authority of Singapore (MPA).

The world's biggest bunkering port sees Petrochina stay in the number two spot for a second successive year, having been ranked 12th in 2016.

Singapore is by far the world's biggest bunker market by volume, seeing sales of almost 50 million mt of product in 2018

Chemoil, now operating under Glencore Singapore PTE Ltd, after being ranked as the top supplier for 2015 and 2016 and 3rd for 2017, this year has the dubious honour of being the biggest negative mover by sinking 18 places to 21st.

Brightoil, despite its troubles late in the year including its entire six-strong fleet of bunker tankers being placed under arrest in November, ranked 28th having been placed 17th in 2017.

Singapore is by far the world's biggest bunker market by volume, seeing sales of almost 50 million mt of product in 2018. There are currently 51 licenced bunker suppliers operating in the port.