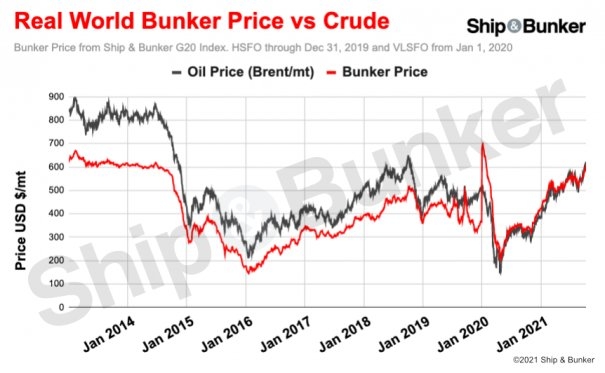 Natural gas prices may be grabbing the energy headlines, but bunker buyers will no doubt remain focused on crude's continued rise after Brent recently breached a three-year high.

With the price of bunkers intimately linked to crude, albeit a relationship temporarily muddied by IMO 2020 and the shift away from HSFO to VLSFO now being the industry's marine fuel of choice, it begs the question how high are today's bunker prices in historical terms?

The short answer: With the exception of a few weeks around the January 1, 2020 introduction of the IMO 2020 rule, in real terms bunker prices today are the highest they have been since July 2014, over seven years ago.

As usual, for my analysis I have used data from Ship & Bunker's "G20" Global 20 Ports Average that tracks the average price of bunkers in 20 key bunkering hubs responsible for a significant proportion of global volume. For comparisons with crude, Brent has been converted from barrels to metric tonnes at a rate of 7.53 bbls / mt.

To get a "real world" bunker price, we have to take into account that prior to January 1, 2020 HSFO was by far the most popular grade of marine fuel, displaced thereafter by VLSFO. Thus, to accurately reflect the price of fuel ships were actually burning I've created a composite index comprised of the HSFO price up until December 31, 2019 and the VLSFO price after that. That price is reflected in the Figure 1 graph above.

Aside from this brief IMO 2020 spike, bunker prices have not been in the $600's since July 2014. Of course, at that time we are comparing with an HSFO price when bunkers were priced at (their typical for the time) 25% discount to Brent. If buyers had been lifting VLSFO in July 2014 when crude was over $110/bbl they would have been paying over $820/mt for fuel - presuming today's Brent / VLSFO relationship held true.

The good news for buyers of scrubber equipped tonnage if that HSFO prices have remained lower than VLSFO, but looking only at historical HSFO prices they are also the highest they have been for some seven years.

As for where prices are going from here, readers can look at my analysis on this from earlier in the month:

The firm plans to deliver a demonstration model on a commercial ship by next year.

Castrol's global marine and energy division has selected Island Lubes Distributors to market its lubricants in the marine and power generation sectors in Jamaica for the next three years.