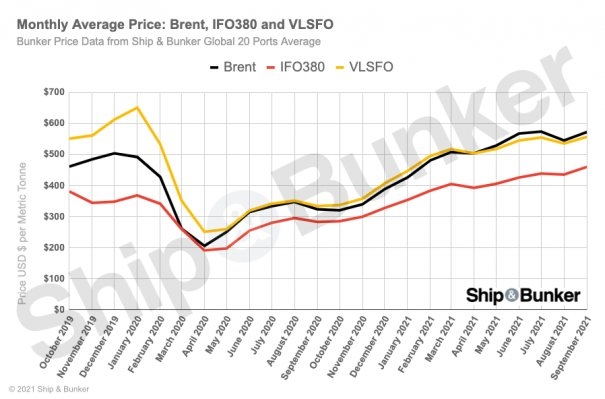 Knowing the relationship between the price of crude and bunkers is useful for anyone who wants to better understand what the future cost of marine fuel might be.

When I took an in-depth look at the Brent / VLSFO relationship in January, a year after the introduction of the IMO 2020 rule and beginning of the VLSFO era, I explained that even with over a year of VLSFO data it was difficult to say for sure if any real trend had been established.

This was due to the unusual market during 2020, particularly during H1. Namely, in January the 0.50%S cap had only just come in to force so there was a unique squeeze on the market both in terms of supply and demand. Shortly after that markets were impacted by the onset of the Coronavirus pandemic.

While we have yet to return to a full sense of pre-pandemic norm, with the end of September marking two years of VLSFO data now available I thought this would be the perfect time to revisit the Brent / VLSFO relationship.

Once again I have used data from Ship & Bunker's "G20" Global 20 Ports Average that tracks the average price of bunkers in 20 key bunkering hubs responsible for a significant proportion of global volume. For comparisons, Brent has been converted from barrels to metric tonnes at a rate of 7.53 bbls / mt.

Specifically, for H2 2020 VLSFO averaged a premium to Brent of 3.6%. For 2021 to date that has flipped to an average discount to Brent of almost 0.5%, with monthly averages for VLSFO having been priced at Brent or below since April 2021.

As regular readers following our volume surveys will know, during this period we have seen some pretty big swings in terms of sales volumes - some ports significantly more than others. In big picture terms at least, that doesn't seem to have had much of an impact on the Brent / VLSFO price relationship.

As for IFO380, after experiencing a somewhat erratic relationship with crude during the run up to, and immediately after, the January 1, 2020 introduction of the 0.50%S sulfur cap, things seems to have slowly settled back to historical levels. For 2020 H2 we save an average discount to Brent of around 14%. For 2021 to date that discount has averaged at 21%.

Have This Year's Bunker Prices Been What We Expected?

As for the all important "scrubber spread" - the premium paid for VLSFO over HSFO that can still be burned by tonnage equipped with exhaust gas cleaning systems (EGCS) - for the first nine months of 2021 this looks to have returned to a healthy level.

After tumbling from the dizzying highs of over $250/mt at the start of 2020 to under $60/mt by August, for the first nine months of 2021 the monthly average premium has been in the $94/mt to $119/mt range with an average for the period of $108/mt. This is presumably good news for scrubber manufactures and owners of scrubber equipped tonnage alike, with a high / low sulfur spread of $100/mt viewed as a key level for decision makers considering the technology. 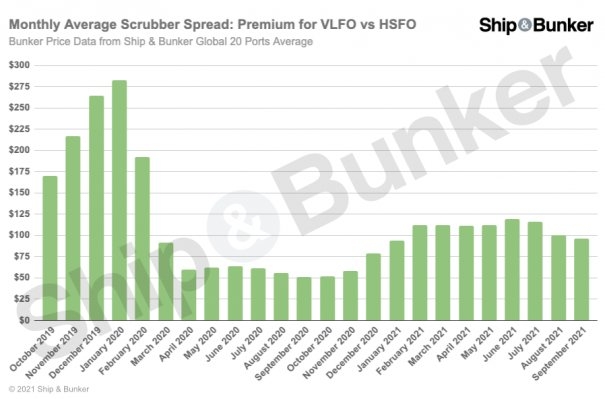 There have been predictions about the return of $100 crude during 2021 for some time now, and as Brent this week may have retreated after briefly touching a near three year high of just over $80/bbl, in general prices have been on an upward trend.

Among the most recent crystal ball gazers is Bank of America Global Research who earlier this month said $100/bbl oil could return within the next six months should this winter be colder than usual.

"While we have long held a bullish oil view, the current global supply-demand deficit is larger than we expected, with the recovery in global demand from the Delta impact even faster than our above-consensus forecast and with global supply remaining short of our below consensus forecasts," Reuters quoted a September 26 note from Goldman as saying.

If the predictions hold, and the now established Brent / VLSFO relationship is maintained, this would mean bunkers priced at $675/mt to $750/mt by year end - a steep rise from their current levels around $580/mt.

Looking to what we might see next year, Barclays this week raised its forecast for 2022 to $77/bbl, while Morgan Stanley has 2022 at $85/bbl for its "bull case" scenario.

Brent in this range would translate into VLSFO bunkers between $580/mt and $640/mt, provided the current Brent / VLSFO relationship is maintained.

The company is looking for candidates with at least five years of experience.

23% of Tanker Orderbook Will Run on LNG: Gibson

Some 23% of the current tanker orderbook is for LNG-fuelled newbuildings.

The US saw 0.4 million b/d of residual fuel oil deliveries in November.