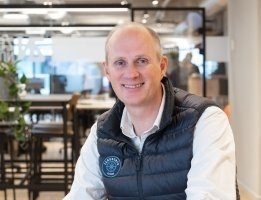 Søren Meyer has been the firm's CEO since its launch in June 2020. Image Credit: ZeroNorth

Technology firm ZeroNorth's latest acquisition will help the firm add a layer of sophistication to its bunker pricing models, according to CEO Søren Meyer.

The firm announced on Tuesday its acquisition of marine fuels platform Prosmar Bunkering AS for an undisclosed sum. Prosmar Bunkering will operate as an independent, standalone business with the same management team in place.

Prosmar has a special focus on gathering data and providing a platform for collaboration amongst clients.

In an interview with Ship & Bunker, Meyer described the firm as a 'perfect fit' for ZeroNorth.

"Prosmar has a special focus on gathering data and providing a platform for collaboration amongst clients; that's why it's a perfect fit for our business," he said.

"ZeroNorth is bringing these components together into one platform to enable optimisation across the entire value chain."

The Prosmar acquisition brings two separate marine fuels services into the ZeroNorth stable. Prosmar's two other services, Prosmar Risk and Prosmar Price Matrix, are not included in the deal.

It's to some extent similar to what we've done when we acquired ClearLynx.

"They started in bunkering with two main focus areas: one is a bunker pricer, and the second is a bunker dashboard," Meyer said.

"They really spent a lot of time modelling bunker prices and forward curves, using it for mark-to-market of positions.

"And then they ventured into saying, with the bunker dashboard, can we make it much easier for bunker procurement transparency.

"It's to some extent similar to what we've done when we acquired ClearLynx, but with a higher focus on the bunker-price accuracy and the collaborative approach to data transparency between the different participants on the platform."

About 95% of all the clients are anonymously sharing parts of their data sets.

"The combination of accurate swaps pricing and actual purchase data volunteered by customers allows Prosmar to calculate the port premiums and therefore give a real-time representation of the expected bunker price at a given port," he said.

"When you are using the platform, you can decide if you want to anonymously share your procurement prices as a client.

"About 95% of all the clients are anonymously sharing parts of their data sets.

"Customers are able to benchmark against the Prosmar real-time price."

Meyer said Prosmar would remain a standalone business within ZeroNorth because what it offers is different from the ClearLynx service, now integrated into its parent company as ZeroNorth Bunker since its acquisition in December 2021.

"I think it's two different offerings [ZeroNorth Bunker and Prosmar]," he said.

"Different players will have different needs, and if you combine it into one, you'll force everyone into one grey basket."

Averages are simply not good enough; we need much more if we are taking million-dollar decisions.

But while Prosmar will remain separate, its inclusion in the ZeroNorth stable will be used to improve the bunker pricing data used for the whole ZeroNorth platform, Meyer said.

"Assessing bunker prices is a fairly complex thing, because there's a lot of small transactions," he said.

"Averages are simply not good enough; we need much more if we are taking million-dollar decisions on where to bunker and how much to bunker.

"If you take that on average data points, they will be average decisions.

"Our belief is that the more granular datasets we can get, the more we can support the industry to take optimal decisions across the value chain."

The systems can delivery fuel savings of as much as 17% compared with traditional single-unit diesel generator sets, according to ABB.

Covering a range of projects from rail connections to cold ironing for ships.