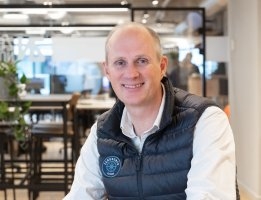 Søren Meyer has been the firm's CEO since its launch in June 2020. Image Credit: ZeroNorth

Maersk Tankers spin-off ZeroNorth has added a key piece of the shipping optimisation puzzle to its portfolio with the acquisition of bunker procurement platform ClearLynx.

Once it integrates ClearLynx's systems, the ZeroNorth platform will have input into every stage of the bunker fuel's life on a vessel, from where and when it gets bought to how efficiently it is consumed. ZeroNorth announced its acquisition of ClearLynx for an undisclosed sum on Tuesday.

ZeroNorth has added ClearLynx to its portfolio in an effort to bring together as much data as possible on the bunker procurement process into one place, CEO Søren Meyer said in an interview with Ship & Bunker.

"We all know that bunkers are a very big cost," Meyer said.

The challenge [the bunker industry is] having is that the data is fragmented and the data is isolated.

"The trader, the operator, the vessel owner and the bunker buyer -- each one of them is looking at this, and in each of those silos there's different personas doing different things in different bubbles.

"What we've done is we started out building out award-leading real-time weather route optimisation, using a sophisticated fuel model underneath; that has been our core bread and butter. Then last summer we acquired Propulsion Dynamics, which was a leading fuel and vessel optimisation company where we really got detailed information on the vessels.

"Why, then, ClearLynx? Because they do all the bunker optimisation, they've got an integrated bunker platform ensuring that I take the right bunkers at the right place and the right time, with the right supplier, and understand all the data that is driving that.

"When you start getting that type of data, then that will actually have an impact on what route you are sailing in and at what speed."

ZeroNorth was spun out of Maersk Tankers in 2020 as a company providing vessel optimisation software to improve ships' fuel efficiency.

The firm's platform is currently saving users an average of $100-150/day per ship, Meyer said.

The ZeroNorth platform is currently saving users an average of $100-150/day per ship.

"Connecting the dots, I think this will only grow, and that's a saving that is yielding directly into emissions," he said.

"It's giving between two and three percent, and we are confident that will grow within the next year or two to five to ten percent."

ClearLynx was founded in 2014 by Gerry Van Geyzel as an independent bunker procurement platform, at first within brokerage LQM and then as its own company after Bunker Holding took over LQM the following year. Van Geyzel will now stay on at ZeroNorth as sales ambassador and strategic advisor to Meyer.

Since then the platform has made significant inroads into the bunker market, with the company announcing last year that in July marine fuel supplier TFG Marine conducted an estimated 17% of its bunker trades through the ClearLynx service.

Building up bunker pricing information to complement its fuel optimisation service was a logical next step for ZeroNorth, and it had been making some efforts to do so internally over the past year.

In May 2021 Monjasa announced it would be making some of its bunker pricing and fuel availability data available through the ZeroNorth platform, and in September it emerged that hybrid broker BunkerEx would also be submitting pricing data.

We're taking a similarly minded leading company within the space and adding to our platform.

The decision was taken to acquire ClearLynx instead of attempting to build something similar internally in the interests of speed of growth for the company, Meyer said.

"You can always build or buy and consolidate," he said.

"We're taking a similarly minded leading company within the space and adding to our platform; that accelerates things a lot."

ZeroNorth regards the ClearLynx service as complementary to the roles of other players in the marine fuels supply chain, rather than trying to do away with them, Meyer said.

We're not competing against the traders or the physical suppliers.

"We're not competing against the traders or the physical suppliers; we're enabling optimisation across the industry," he said.

"I think a lot of physical suppliers will see a lot of value from being able to see more than just a spot price.

One of the benefits of the new combined platform once ClearLynx is integrated will be greater progress on decarbonisation, Meyer said.

Those who are paying for the fuel are not having much impact on how much is consumed.

"What is hampering the industry from saving emissions from now is the misalignment across the industry between the owners, the charterers, the cargo owners and the bunker suppliers," he said.

"Those who are paying for the fuel are not having much impact on how much is consumed.

"By getting a uniform platform that has all the bunker procurement, the bunker data, the voyage optimisation and the vessel optimisation -- having that in one platform will bring transparency and show exactly where emissions are hiding."

Decarbonisation efforts may also be helped if the firm is able to start putting out information on alternative bunker fuel prices.

"ClearLynx has already done a lot of work on this, though of course it's still an immature market," he said.

"I think an interesting part about this platform and the power the data will have is that we will have a very good view on where, when and how much the industry is bunkering.

"I think a lot of the new fuels will be competing against other industries; they're not just being produced for the marine side.

"We would need to make it very easy for those producing these fuels to put them into the market, and I'm very certain that the data we have here will be able to fuel that transition to the clean fuels."

Parties to the UN's Barcelona Convention have agreed to the measure this week.

ICS to Work With IRENA on Shipping Decarbonisation

The firms will cooperate over the next two years on decarbonisation projects.