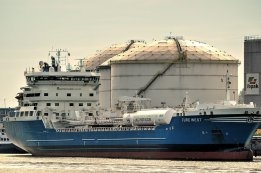 The LNG bunker industry will need gas from renewable sources if it is to meet the IMO 2050 strategy. Image Credit: File Image / Pixabay

LNG bunker industry group Sea-LNG plans to publish independent research on the availability of liquefied biomethane (LBM) and liquefied synthetic methane (LSM), a key question mark hanging over whether LNG can be a part of the shipping industry's plans to halve greenhouse gas (GHG) emissions by 2050.

The group expects to publish an "independently conducted report" on the subject sometime in the first quarter of this year, it said Wednesday.

"Although research continues, the initial findings on the potential global availability of biomethane in the next decade are particularly exciting," Sea-LNG said.

The International Maritime Organization's (IMO) initial strategy on GHG emissions reduction envisages a cut of at least 40% from 2008's levels to carbon emissions per transport work by 2040, and supporters of LNG claim its use in combination with energy efficiency measures will be enough to meet that target.

But by 2050 the IMO strategy requires a cut of at least 50% to total GHG emissions from the shipping industry, and the use of conventional fossil LNG will not be consistent with that target.

LNG proponents claim that gas produced from biomass or from green hydrogen reacted with carbon dioxide -- LBM and LSM -- will become available by that point, either on their own or blended with fossil LNG, meaning LNG bunkering can be a viable 2050 compliance strategy.

LBM and LSM are not widely available at the moment, and new information on when they are likely to emerge in large volumes would be welcomed by those considering buying LNG-fuelled ships.

As with all of the alternative fuels currently under discussion, LBM and LSM would require large quantities of either arable land or renewable electricity being made available for the shipping and bunker industries, at a time when every other industry will also be competing for these commodities as part of their GHG reduction efforts.