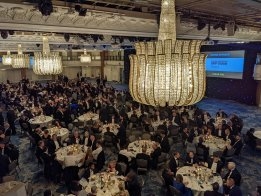 About 600 bunker industry representatives gathered in the Grosvenor House Hotel in London at the start of IP Week on Monday night for the IBIA dinner, normally an annual affair but cancelled last year because of COVID travel restrictions. The dinner is one of the biggest events in the bunker industry's calendar, as well as a significant source of funds for IBIA.

The event marked one of the last official appearances of Bunker Holding's Henrik Zederkof as IBIA chairman, with his term coming to a close at the end of March. Zederkof made a speech noting recent achievements by IBIA, including the activities of its working groups and the setting-up of regional boards.

"I believe that the value that IBIA provides to our members has been increasing, positively supported by the increased complexity of our industry," he said.

"That makes the future look positive."

Zederkof is set to be replaced on April 1 by Tim Cosulich of bunker supplier Fratelli Cosulich. In a speech at the dinner he reminded the audience that he had a family connection to the role.

"My uncle Antonio Cosulich, who most of you have met, was the second ever chairman of IBIA, and it makes me proud and honoured to try and follow in his footsteps," he said.

"IBIA relies on members to raise their hands," he added.

"We are very fortunate to have very talented professionals in our secretariat, but these professionals need to be supported by members.

"So the message to you is get involved, join a working group, join a regional board."

IBIA Director Unni Einemo used her speech to highlight the industry's response to the difficult environment of recent years.

"Looking back at the past two years, the industry has coped with two major challenges; IMO 2020, lest we forget, and the COVID-19 pandemic," she said.

"The bunker industry has proven adaptability and resilience in dealing with both, and I think we should take courage from this as we work on a much bigger energy transition required from the industry to meet ambitious greenhouse gas reduction targets."

Net-Zero Bunker Fuels 'An Opportunity for All', Says ICS

New report, 'Fuelling the Fourth Propulsion Revolution: An Opportunity for All' paints an upbeat picture of the maritime sector's energy transition.

Cruise lines and ports are behind the idea.