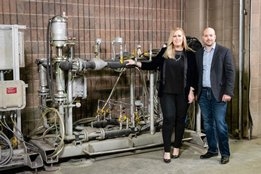 Canada-based International Ultrasonic Technologies Inc. (IUT) says it still sees its desulfurization technology helping industry stakeholders manage the reality of IMO2020 and is pressing ahead to make it a commercial reality.

Speaking to Ship & Bunker earlier this month, Kerri McGrath, CEO, said the firm has recently made a number of changes to both its personnel and desulfurization process, while also completing a significant amount of further research and development activity.

And having previously targeted 2018 for its first commercial desulfurization unit, the firm has now set a new date of late-2020 for such a plant.

Specifics on how IUT's desulfurization works have been previously discussed in these pages, but the company says in addition to its original ultrasonic treatment it has now added a second catalytic stage to its desulfurization process that focuses on breaking down sulfur compounds in the feedstock into SO2.

The result is that the team remains confident they can cost-effectively desulfurize crudes and other high sulfur products, such as taking a 3.2%S HSFO down to 0.9%S with a potential to reduce further.

"Even if we're not taking it down to 0.50% sulfur, which is required for the new sulfur cap, a 0.9% sulfur fuel oil makes a good blend stock for producing IMO2020 compliant fuel," says Derek Krivak, an oil and gas industry veteran of some 20 years who recently joined IUT as Strategic Growth Advisor.

IUT is not the only firm looking to desulfurization technology to address the challenges of producing low sulfur fuels. And while the firms' technologies all vary, the lack of commercial uptake to date is shared.

Krivak says there are a number of reasons for this, but the viability of the technology is not one of them.

"The question is does it work at scale and getting to this stage takes some engineering know how. That is where I have come in to complement the team," he said.

There are also other factors in play, he says, not least of which is that the technology is most applicable to smaller to medium-sized operations where the urgency to act on IMO2020 is somewhat less than for larger players.

The technology works and no one can tell us it does not, the question now is showing it works at scale

"Many are trying to ignore the 2020 issue and simply haven't yet given it enough attention," says Krivak.

"Others, such as some of the smaller refiners, live very precarious day-to-day so see no need to plan too far ahead. But this will all change very soon once the new rules come in and the supply-demand balance is better known."

Other than more usual barriers such as caution over adopting new technology, McGrath says there have also been logistical barriers. The biggest is that large amounts of chemical catalyst need to be delivered to any potential processing site.

"What we've done is engage with chemical providers to make it a turnkey process. Having those relationships now in place will support commercialization," she says.

Krivak, meanwhile, is keen to stress that his company's technology is not just aimed at refiners, and sees all stakeholders from pipeline operators to bunker suppliers as potentially benefitting from it.

"Small to medium sized traders are doubtful they are going to get the low sulfur fuel oil. Our technology can help," he says.

"We can also do partial upgrading of products, such as metals and viscosity reduction. This can be used to take off-spec bunkers and bring them on spec."

IUT says next month it will travel to Europe and, along with its Italy-based project partners, look to pick a site for a demo plant that could then be used commercially sometime in 2020.

"The technology works and no one can tell us it does not, the question now is showing it works at scale. But there is no doubt in my mind that this technology will be applied on a commercial level," Krivak concluded.

The software helps shipping companies optimise their vessels to reduce emission, with a view to compliance with the upcoming CII and EU ETS regulations.

Maersk signed a memorandum of understanding with Jordan's Ministry of Energy and Mineral Resources at the COP27 event in Egypt.