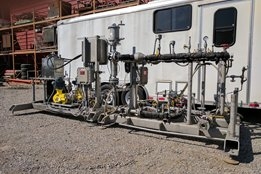 With an eye on the IMO 2020 bunker market, Canada-based International Ultrasonic Technologies Inc. (IUT) says it is on-track to produce the next generation of its technology; a commercial HFO desulfurization unit by mid-2018, having made significant progress with the application of its technology in recent months, Managing Director Christine Gao has told Ship & Bunker.

As Ship & Bunker previously reported, IUT said last July it was able to demonstrate in the lab it could take a 3.8% sulfur 500 cSt product "down into the 2% range".

Following improvements to its process since then, the company says it recently tested a 500 cSt HFO sample from Italy and successfully reduced it from around 1.0% to 0.15% sulfur.

IUT says a key development since the summer has been its partnership with three professors working with University of Calgary spin-off company PC-CUPS that has been actively engaged in optimizing IUT's desulfurization process.

"With facilities from the Department of Chemical and Petroleum Engineering, along with the support of partners involved in the HFO business, we have the ability to optimize our process in a very short period of time," said Dr. Pedro Pereira, who leads the Engineering team.

IUT says its technology works by taking an oxidant and a catalyst blended together with the higher sulfur heavy fuel oil, which then goes through an ultrasonic reaction chamber to speed up a reaction process that turns the sulfur into sulfones.

"Once we perform the reaction we are able to extract most or all of the chemical we have used via conventional separation process, so the resulting product is lower in sulfur but is otherwise unchanged," Pereira explains.

On a global basis, the sulfur content of HFO bunkers averages around 2.7%, and it is the processing of these higher sulfur products where IUT's ambitions ultimately lie.

"Targeting HFO in the 3% sulfur range remains the focus of the heavy fuel project over the next few months, and there is no chemical reason for us not to achieve very high levels of desulfurization with heavy feed stocks. It is not a matter of a reluctance of the sulfur components to react, they are just more abundant. So, it is only a question of how many ultrasound steps to perform, and what proportion of chemicals, catalysts, and temperature conditions to use," said Pereira.

"We are aiming for a mostly universal process, and while I cannot yet guarantee that we are going to produce 0.5% sulfur from all higher sulfur HFOs, we are going to show we can substantially reduce from 3% to maybe 0.5% or 0.4% sulfur, and certainly to less than 1.0% sulfur.

From an economic perspective, Gao says the cost of its technology will also be much less than traditional desulfurization processes: "Even if we put two units together it would still be 40% of the cost of a hydro-processing unit," she said.

Looking ahead, Gao says this month they are looking to produce a mini prototype unit as a quick demonstration at the University level, and could then have a commercial unit operational as early as June.

"The target market will be Europe as this is where our existing partners are located, who are currently also most focused on applying our technology to 1% sulfur products," she added.

The path for processing 3% sulfur products will take place in parallel to this.

"If, for example, we had a major shipping company come to us and say, 'let's put it on a ship,' then we'd do that, but in speaking to potential clients the appetite right now is more for onshore applications as you can access a lot of volume by having a presence in a relatively small number of ports. But the idea of having a unit onboard a vessel could be attractive to vessels that find themselves tramping in areas of the world where sourcing compliant product is challenging."

As for who its partners are, Kerri McGrath, VP Business Development, says IUT has been actively engaged with a number of interested parties including fuel suppliers, ship owners, and ship builders who are all also in the process of evaluating alternative technologies for IMO 2020 compliance.

"We believe that our technology will be able to reduce sulfur content by approximately 90% to meet the 2020 IMO regulations, and while the unit Capex and Opex costs will be higher than the unit tested and already commercially proven for light fuel oils, the return profile will still be significant given the sizeable differential expected between low sulfur heavy fuel oils and 0.50% compliant fuels," said McGrath.

"Based on this, we are in negotiations with a couple of major international partners and are working towards finalizing strategic partnerships with them soon. We are also actively looking for interested parties to add as partners in markets with strong demand for (either light or heavy fuel oil) compliant fuel."

For further details, IUT can be reached as follows:

Shell recently bunkered the 1,400 TEU Containerships Aurora with about 483 m3 of a bio-LNG blend.