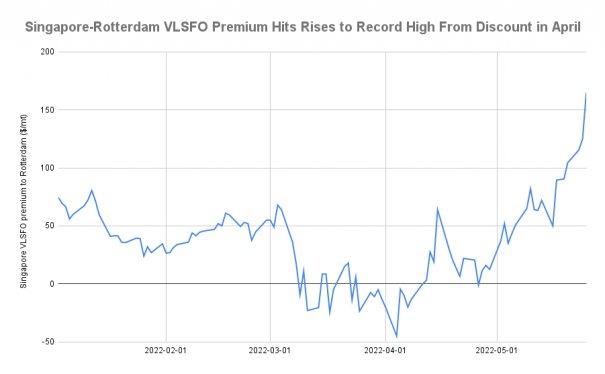 Singapore VLSFO has moved to a record premium over Rotterdam from a discount early last month. Image Credit: Ship & Bunker

A supply crunch has raised Singapore's VLSFO price significantly this week, leaving its premium over Rotterdam at the highest level on record.

VLSFO delivered in Singapore jumped by $56/mt to $1,010.50/mt on Wednesday, according to Ship & Bunker prices. The price increase at the world's largest bunkering hub has significantly outpaced that of other ports.

I believe it to be the lag between when Russian product exited the market in NWE and the knock-on effect for arbitrages cargoes c. 1 month later.

Singapore's VLSFO price came down to $992/mt on Thursday, narrowing the premium to Rotterdam to $142.50/mt.

The VLSFO jump in Singapore has also significantly widened its VLSFO-HSFO premium -- a key measure of how much scrubber-equipped ships can save in their bunker costs. The premium stood at $347/mt on Wednesday, compared with an average this year of $192/mt and a 2021 average of $117.50/mt.

A local bunker market source highlighted tightening supplies as a likely cause of the jump in prices. Paul Hardy, head of business development at brokerage NSI, cited similar reasons.

"I believe it to be the lag between when Russian product exited the market in NWE and the knock-on effect for arbitrages cargoes c. 1 month later," Hardy told Ship & Bunker by email.

"This has been exacerbated by the backwardation in VLSFO making a number of other trades marginal at best.

"This is seen in the forward curve currently with strengthening backwardation for front months in Singapore for VLSFO.

"Interestingly the HSFO curve is much flatter pointing towards more balance of supply and demand."

Singapore is facing shortfalls in bunker supply as the same time as demand looks set to climb in response to the Shanghai lockdown easing.

Low-sulfur residual inflows to Singapore from the West of Suez region are set to total just 1.5-1.8 million mt in May, Argus Media reported earlier this week, down from last year's average of 2.5 million mt/month.

The reduced supplies are down to tightening markets in the face of the slow phase-out of Russian oil from global markets. Russia's fuel oil exports come to Singapore gradually from the Baltic and Black Sea, passing through several European and Middle Eastern markets on the way, meaning during tight market conditions the supplies are much reduced by the time they reach Asia-Pacific.

The record Singapore-Rotterdam spread has come shortly after another surprising move in the price relationship between the two ports, the brief emergence of a Singapore discount to Rotterdam in early April.

Singapore's VLSFO price came down much closer to Rotterdam's in the immediate aftermath of the Russian invasion of Ukraine, moving to an average premium of $8.50/mt in March from one of $47.50/mt across January and February.

It then moved to a discount for 11 consecutive days from March 25 to April 8, with Singapore's discount to Rotterdam peaking at $45/mt on April 4.

But with Shanghai's lockdown now ending, which may do much to ease congestion worldwide as port throughput increases across Asia-Pacifc, Singapore's bunker demand may be about to surge just as supplies contract.

Jeroen de Vos, head of quality at Peninsula, discusses the difference between low viscosity and lubricity in marine fuels.

The clause sets out how "to allocate costs and responsibilities for obtaining, transferring, and surrendering greenhouse gas emissions allowances for ships operating under an emissions scheme."