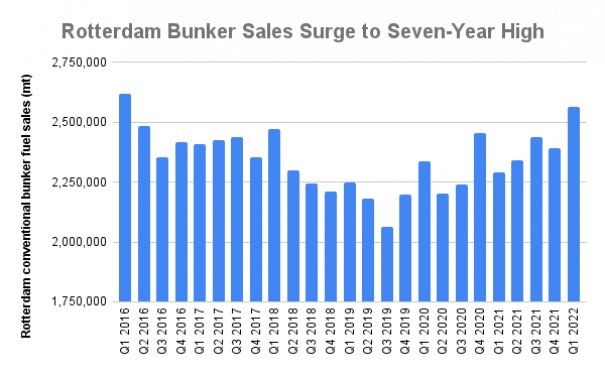 Rotterdam's first-quarter rise in bunker sales is something of a mystery. Image Credit: Ship & Bunker / Data Credit: Port of Rotterdam

Conventional bunker sales at the Port of Rotterdam, the world's second-largest marine fuels hub, jumped to a seven-year high in the first quarter, gaining on both a year-on-year and quarter-on-quarter basis despite the effects of Russia's war in Ukraine.

Conventional sales excluding lubricants, LNG and biofuels reached 2.6 million mt in the first three months of the year, according to the latest data from the port authority, up by 15.2% from the same period a year earlier and by 9.4% from the fourth quarter of 2021. The total was the highest seen since the first quarter of 2016.

The gains show a remarkable level of resilience to the impact of the Russian crisis on bunker markets since late February. The Rotterdam bunker market is one of the main recipients of fuel oil from Russia, and it had been expected that companies seeking to avoid dealing in Russian-origin oil would cause problems for marine fuel supply at the Dutch port.

Mineral oil product throughput at Rotterdam sank by 20.5% in the first quarter to 13.5 million mt, with the port authority citing a decline in fuel oil shipments from Russia as being a key cause.

Biofuel sales continued to climb. The port saw 147,339 mt of bio-fuel oil blend sales in the first quarter and 12,349 mt of biodistillate blend sales, up by 127.1% and 202.4% respectively from the same period a year earlier. These figures reflect sales of blends containing unreported ratios of biofuel and conventional fuel.

Conversely, Saudi Arabia warns that the energy market is running out of capacity.