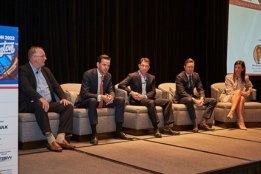 A panel at the IBIA Annual Convention 2022 in Houston last week said the current poor prospects for shipping demand in 2023 were not yet bad enough to slow the industry's decarbonisation agenda.

As has become the norm at bunker industry events over the past two years, almost every discussion at last week's convention ended up turning to the theme of decarbonisation before long.

The convention in general gave a gloomy view of the prospects for shipping and bunkering in 2023, and this may trigger concerns that these industries' energy transition will be slowed with less money available for green investments. But that point has not been reached yet, according to panellists from one session of the conference.

"If things get really dicey, the green agenda could get forgotten a little bit," Marc Holm, senior fuel oil trader at commodity firm Hartree Partners, said at the convention.

But asked if the market had yet reached that point, Holm said it had not.

"I think behind the energy transition is a political push, which is probably not going to go away," Georgia Kounalakis, managing director of Bunker One USA, said.

Tom Sosnowski, associate global marine fuels director at price reporting agency Opis, said for much of the shipping industry the real decisions around decarbonisation were too far off at this point to be postponed by current market conditions.

"We're moving in that direction, but it's not going to happen for a while," he said.

IBIA CONVENTION: Access to Credit Will Require Improved Compliance and Transparency in 2023

"I think the elephant in the room is fraud," Point Bonita Capital's Ross Berger told a panel session at the IBIA convention last week.