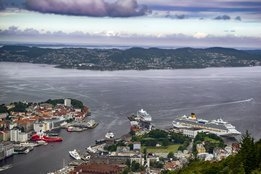 A new study by CE Delft looking to address concerns over the use of open-loop scrubbers within port areas has concluded they have only a small impact on water quality when compared to future EU standards for priority substances in the water.

Priority substances are defined as those presenting the most significant risk to or via the aquatic environment.

The study is particularly important as part of the ongoing scrubber debate as until now research has focused mainly on the use of scrubbers within open waters, rather than the relatively closed water systems of ports.

It was commissioned by Cruise Lines International Association (CLIA) Europe, with the cruise sector historically one of the headline adopters of the technology.

Recent concerns over the possibility of contaminants from washwater building up within port areas over time, both in terms of impact on water quality and sediments, have come alongside high-profile bans of open-loop scrubbers within the local waters of Singapore and Fujairah.

However, the study finds that any impact from open-loop scrubber use within a typical port area will be small.

The report has been submitted to IMO's GESAMP EGCS Task Team and as an IMO Information (INF) Paper for presentation at IMO PPR 7 in February 2020, and will be discussed as part of wider efforts at IMO to review and harmonize rules on scrubber discharge.

How Was the Study Conducted?

CE Delft says the study is unique as it uses empirical data from almost 300 scrubber washwater samples, and this is the most extensive dataset of its kind to be analyzed in this manner.

It also uses the MAMPEC-BW model to calculate concentration levels in ports, which is widely used for other regulatory matters such as the approval of ballast water management systems and antifouling agents.

The study modelled the impact on equilibrium concentrations of 11 metals and 16 Polycyclic Aromatic Hydrocarbons (PAHs) in the water, which are the main contaminants of concern, and compared these with European water standards that are applicable from 2021 onwards.

It uses a reference scenario of 40 tonnes/day of fuel being consumed by ships at berth operating open-loop scrubbers, said to be equivalent to 28 small bulk carriers, 6 large container ships, or two medium-sized cruise ships at berth for every day of the year.

What Did the Study Conclude Specifically?

The study concluded that in most ports and for most substances the increase in concentration levels is less than 0.1% of the water quality standard limit value, while the increase in sediment concentrations of metals and PAHs after five years is less than 0.3% of the relevant standards for dredged materials. In other words, even over time, open-loop scrubber use alone is unlikely to significantly move the needle for concentration levels of contaminants within port waters.

As would be expected, the report notes that real-world results for specific ports depends heavily on the exchange of port waters with the surrounding waters, and that in ports where this hydrodynamic exchange is low the increase in concentration levels can be higher.

Concentration levels for certain PAHs, for example, could increase by 0.6% of the limit value, it found.

The modelling also highlighted that an understanding of the existing background concentration levels of contaminants within port waters is important as part of the wider picture of understanding water quality and the impact from scrubbers. Open loop scrubber use in ports where contaminant levels are already high is naturally more significant than in ports where existing levels are lower.

That said, in cases that are considered default cases for regulation in other areas such as ballast water management systems and antifouling coating, "the impacts of using open-loop exhaust gas cleaning systems are small in relation to the agreed water quality standards for 2021."

How Will This Impact the Scrubber Debate?

One of the few unanswered questions of open-loop scrubber use has been their impact within the relatively closed water systems of port areas, particularly with respect to sediment.

This study addresses those concerns, and scrubber advocates will rightly view it as another solid piece of science that adds to a growing body of evidence indicating the use of scrubbers has a negligible impact on the marine environment.

The study seems unlikely to change the view of scrubber sceptics that will no doubt point to the fact that it was commissioned by those already heavily invested in the technology, and as such was unlikely to reach any other conclusion.

Singapore and Fujairah have also still not said publicly how they reached their decision to ban open-loop scrubbers within their waters, so it is impossible to say how this study could change their position.

The study will also do little to change the minds of those who believe EU water quality standards fall short of what they should be.

This is an important study as it answers one of the few outstanding questions for open-loop scrubber use. While it is unlikely to put either side of the argument ahead in the eye of the neutral, it ensures the technology's fate is seen to remain in the hands politicians rather than scientists.

How this will impact discussions at IMO remains to be seen, although CE Delft are the same group that conducted the original Fuel Availability Study that led to IMO's decision to introduce the 0.50% sulfur cap from January 2020 in the first place, so the findings come from a source evidently well respected by IMO.

But with marine scrubbers having been in use for over 15 years, and the technology's adoption level today in response to IMO2020 lower than was predicted in 2016, perhaps the bigger question is why it has taken until now for these issues to be fully considered.

The company is looking for candidates with a master's degree in engineering and a good understanding of coding.