IMO: Phasing out Shipping GHGs "A Matter of Urgency" 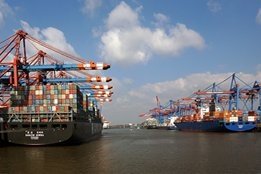 IMO says phasing out Shipping GHGs should happen "as soon as possible in this century." File Image / Pixabay

Speaking during the opening of the plenary session, IMO's Edmund Hughes said the strategy confirms IMO's commitment to reducing GHG emissions from international shipping and, "as a matter of urgency, to phasing them out as soon as possible in this century."

As previously reported, the deal agreed last month at MEPC 72 envisages a reduction in total GHG emissions from international shipping which, IMO says, should peak as soon as possible and to reduce the total annual GHG emissions by at least 50% by 2050 compared to 2008, while, at the same time, pursuing efforts towards phasing them out entirely.

While the International Chamber of Shipping (ICS) says this level of ambition puts shipping "far and away ahead of the rest of the world economy", a report by the International Transport Forum (ITF) at the OECD has suggested that almost complete decarbonisation is possible by 2035 with currently known technologies.